A peek behind the scenes.

“I’m not much of a people person,” I said to my friend Harry Shannon sometime around 2005. At the time I was teaching high school classes in computers, science, and math. “I’m also not creative. I don't know why I think I can be a teacher. ” Harry, who is among other things a counselor and published author, looked at me for a long moment. Just when the silence was becoming unbearable, he said, “Bull&#$*, go write a novel.” I tried explaining to him why that was impossible, but he wasn’t listening to my excuses. “Come back and tell me you aren’t creative when your novel is done, ” he said.

So I sat down and wrote a novel. It wasn’t Hemingway, but it was complete. I went back to Harry and he asked me, “Do you still think you’re not creative?” The answer, I had to admit, was “No.” Then I asked Harry to write a short story with me. We submitted it to an anthology, and it was accepted as the first story in the book. It was so well received that Harry and I asked ourselves, “What happens next?” That led to a novel, then seven more. I have now completed over fifteen manuscripts, eight of which are published.

In late 2015, I started painting. It was just a few pieces as handmade gifts. Since that time, I’ve painted over 200 oils and acrylics, some of which have started winning awards. So much for not being creative.

I was inspired by just a few words from a friend—to tell stories, to create, to entertain, and to help other authors do the same. Those few words also led me to become a book designer and publisher. Being a published author has been a powerful experience. I’ve been a speaker, interviewed in the media, been on panels, and grown my business, and it’s all because a friend didn’t believe me when I said I couldn’t.

Who knows what you might say or write that will inspire someone to become more than they thought they could be?

It’s time to publish your book. If you’ve completed your manuscript, let’s go. If you haven’t, no problem. But I can tell you from personal experience that it isn’t true that “I couldn't write a book” or “I did’t have anything important to say.”

Go write a book—or let us help you get your thoughts to print. We’re here to help you share your message, your excitement, your inspiration with your audience and readers.

Genius Book Services has its roots in a school newspaper in the late 1980s. Steven had the opportunity to become the layout editor, and since he was “technical” and computers were still relatively new, he took the position. That was his first encounter with Aldus PageMaker, which has over the years transformed into the industry standard for page layout, Adobe InDesign. There has never been a time in the last 30 years that Steven wasn’t designing something.

Today, Genius Book Services is a US-based corporation (Los Angeles, California), using native-English-speaking interviewers, ghostwriters, editors, and proofreaders (and our layout and ebook coders are also US-based). Our cover designers come from all over the world to bring you the best cover possible.

We are family owned and operated, and because we're not faceless and impersonal, we can offer you the professionalism you expect with the comfort of knowing that there are real people behind your book. 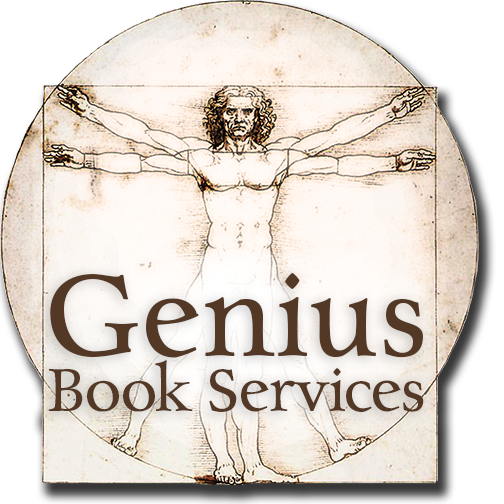